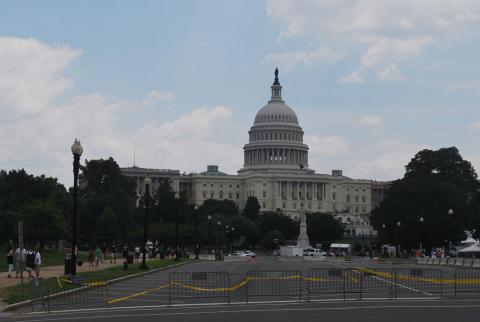 An increasingly radical Democrat Party knows that only by winning control of the US Senate and then the Supreme Court can their vision of a left-wing America become reality.

The great victories of the Left have often been imposed by the Supreme Court, not by voters.  Abortion on demand, homosexual marriage, driving religion from the public square, and nearly abolishing capital punishment would not have taken place without the Court

The Court’s support was equally necessary when Democrats, with narrow and temporary congressional majorities, imposed unpopular and unconstitutional laws such as ObamaCare and gun control.  It was necessary when President Obama, lacking congressional action, tried to move beyond the law by granting amnesty to illegal aliens and crippling America’s energy industry.

Democrats understand that their entire radical agenda is taking a hit each time President Trump puts another constitutional conservative on the Supreme Court.

That’s why they are going all-out to win control of the Senate in November.  A Democrat majority would mean that President Trump would not be able to put anyone on the Supreme Court during the remaining two years of his term.

If the Democrats can win over at least one GOP Senator, they will even block the nomination of Brett Kavanaugh and leave that seat on the Court open until at least 2021 (when they hope a Democratic president will make the nomination).

But the good news is that if the Democrats don’t get their way – if they don’t win a majority in the Senate – all their plans could unravel.  President Trump might even get to put a third Justice on the Court during his first term.  He would almost certainly get that chance if reelected in 2020.

Adding Kavanaugh to the Court in place of Kennedy should make it significantly more conservative.  Replacing Ruth Bader Ginsberg or another of the liberals could seal conservative control for years to come.

But this year’s Senate races could play the decisive role in determining which way the Supreme Court – and America – will go.

We must not only hold on to the GOP majority in the Senate – we must increase it.  Polls indicate that as many as nine or ten Democrats could be vulnerable.  Polls already show several GOP candidates with a small lead over the Democrat incumbents and others running close.

Adding several Senate seats would all but guarantee that Trump’s future nominees will be approved.  It would also, if Democrats are able to delay a vote on Kavanaugh, assure his confirmation in 2019.

That is why FedUp is determined to give President Trump a Senate majority that will let him keep filling court vacancies as long as he is in the White House.

FedUp PAC wants to make sure that voters, especially key swing voters, know how what it means for the Supreme Court if Democrats are back in control of the Senate next year.

We can do it again in 2018.  We can make sure voters know why they must keep Republicans in control of the Senate.

This program of voter contact by email, FaceBook, etc. is relatively cheap, and highly cost-effective (especially compared to expensive TV spots mostly seen by non-voters and confirmed liberals), but it is not free.

FedUp PAC is already planning what needs to be done to protect and expand Trump’s Senate majority.  Those plans can move forward as soon as we have the funds to proceed.